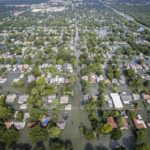 The Greater Houston Partnership has published its initial estimates of the impact of Harvey on the Houston economy and they are lower than initially feared.

The main points are

UPDATE 9/16 : Apartment Data Services have surveyed 80% of the area complexes. Only 2% were damaged. That’s much lower, even in absolute terms, than from Tropical Storm Allison in 2001. Since Harvey average rents have risen by $12 (1.25%) to $966 a month. Those figures are before rental concessions. Prior to Harvey, many tenants were offered 3 months’ free rent. Those concessions have disappeared since Harvey.