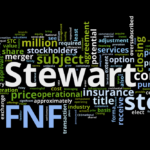 Stewart Information Services (‘STC’)  a title insurance company, with its head office in the Galleria, has agreed to a takeover worth $1.2 billion by Fidelity National Financial, a rival based in Jacksonville, Florida.

The consideration will be 50% cash and 50% stock of Fidelity National. The price represents a 23% premium to the closing stock price of Stewart on Friday. The deal is expected to take about a year to close.

According to the proxy filed last year, if the Executive Officers of Stewart get terminated following a change of control they would get 2 x base salary (3 x for the CEO) plus vesting of restricted stock. For the CEO, Matt Morris, that would mean a package of around $6 million, for the other officers, it would mean packages of close to $2 million. It should be noted that the company has stated that Mr Morris will stay on.

The CFO of Stewart is David Hisey, who was only appointed to the role in September 2017 with a base salary of $450,000, following the retirement of long-time CFO, Allen Berryman. At the time he was hired, his exact terms of employment weren’t disclosed, other than severance provisions being in line with other executives.

I will be looking out for the upcoming proxy to see if payments after a change of control have changed materially since last year.