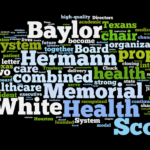 The Boards of Baylor Scott & White (based in Dallas) and Memorial Hermann Health System (based in Houston) have signed a letter of intent to merge.

The CEO of Memorial Hermann, Chuck Stokes, will be staying on as part of the executive team. He stated that;

“Together, we believe we will be able to accelerate our commitments to make care more consumer centric; grow our capabilities to manage the health of populations; and bend the unsustainable healthcare cost curve in the state. Through this combined system, we have a unique opportunity to reinvent healthcare and make a profound difference in the lives of millions of Texans.” (not sure what this means!)

The deal is an example of consolidation that is taking place as hospitals respond to pressures to curb costs and treat patients away from hospitals. There is a risk that limited competition in the Texas area could drive prices higher. Memorial Hermann currently has a 25% market share in Houston.

In April 2017, the Center for Health Policy at the Brookings Institution and Carnegie Mellon University’s Heinz College noted that ‘Hospitals without local competitors are estimated to have prices nearly 16% higher than hospitals with four or more competitors, a difference of nearly $2,000 per admission.”

The same report noted that  “Research evidence shows that lack of competition can lead to compromised quality. The evidence is not as clear-cut as it is for price, but there are strong studies showing that patient health outcomes are worse at hospitals that face less competition.”