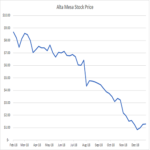 Alta Mesa has hired John Regan as its new CFO. He replaces Michael McCabe who announced his intention to retire in November 2018. The company has its head office in west Houston and is an E&P & midstream company with focus on the Anadarko basin of Oklahoma

Alta Mesa, a PE-backed company, went public in February 2018 via a reverse takeover of a blank check company. Since that time, the market capitalization of the company has plunged from $3.3 billion to $225 million. The share price is currently $1.29.

The blank check company was run by Jim Hackett, the former CEO of Anadarko Petroleum. After the deal closed he became the chairman of Alta Mesa. The company soon disappointed investors with its inability to ramp up output quickly, and other operational missteps.

Just before Christmas, Mr Hackett took over as interim CEO after the resignations of;

At the same time, Mr Hackett employed the services of three consulting executives from Meridian Energy for a monthly fee of $245,771. The consulting firm can also earn a quarterly bonus of $872,950 and a semi-annual bonus of $2.1 million, assuming certain performance metrics are met.

Mr Hackett will also continue to teach a class, once a week, at the University of Texas, on moral leadership in economics.