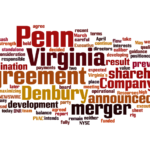 Penn Virginia’s $1.7 billion takeover by Plano-based Denbury Resources has collapsed. Several Penn Virginia shareholders had come out against the deal in recent weeks. No termination fee will be paid by either party.

The day the deal was announced the share price of Denbury dived from $4.35 a share to $3.32.  It continued dropping until reaching a low of $1.39 in December.

Investors worried by high debt and a lack of fit

In addition to the general decline in the price of oil in late 2018 which impacted energy stock prices, investors were also unnerved by the high indebtedness of Denbury and the lack of strategic fit.

Denbury produces oil from mature fields in the Gulf Coast region (primarily in and around Houston and in Mississippi) and the Rocky Mountains (primarily Montana). It uses carbon dioxide in enhanced oil recovery (EOR) techniques to coax more production out of declining wells. Penn Virginia, on the other hand, is a typical shale play operator with its operations in the Eagle Ford basin. Investors didn’t want to mix the different type of assets and it also meant synergies would be relatively small.

In my opinion, the Eagle Ford Basin will soon be ripe for EOR techniques as production growth has stalled. From a technical perspective Denbury is not wrong to be looking at expanding into the Eagle Ford. However, Wall Street doesn’t view the Eagle Ford that way.

Prior to the proposed deal, Denbury had $2.5 billion of outstanding debts. It would have raised more debt to pay the $400 million cash portion of the consideration. On a standalone basis it has a net debt/adjusted EBITDAX ratio of 3.3 x.  Penn Virginia had $511 million of debt and a ratio half that of Denbury.

Penn Virginia valued at a big discount to peers

Denbury’s share price is still below $2 which means the consideration that would have been received by the Penn Virginia shareholders is considerably lower than when the deal was announced.  With oil now trading around $60 a barrel, the share price of most E&P companies has recovered somewhat, which means that Penn Virginia is being valued in the transaction at a large discount to peers.

Penn Virginia was founded in 1882 in Philadelphia and began life leasing coal properties. It acquired oil and gas companies in the 1980’s and later spun off the coal operations. The company went into Chapter 11 in 2016 and exited a few months later, having eliminated $1.1 billion of debt. Debt holders got equity instead. During the bankruptcy restructuring, the company moved its head office to west Houston.

Penn Virginia put itself up for sale in early 2017 and contacted 37 buyers or potential merger partners, though Denbury didn’t enter the picture until a year later. With its restless former debt holders wanting to exit, expect another takeover transaction before too long.