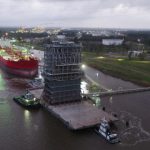 Kirk Meche, CEO of Gulf Island Fabrication, has stepped down. The company is a fabricator of marine vessels with facilities in Houma and Lake Charles, Louisiana. It has its head office in west Houston and a market capitalization of $85 million.

Mr Meche, who joined the company in 1999, has been CEO since 2013. He will stay on until December 31, 2019 at the latest while the company begins a search for his successor.

The company has struggled in recent years as the market for offshore vessels has shrunk. The company is trying to diversify into onshore fabrication and other areas where project management skills are needed (such as offshore wind). Unusually, the company has $50 million of cash on hand and no debt.

Mr Meche will receive a severance payment of $958,000 which is equivalent to two times base salary. Half will be paid immediately, the rest over 12 months. He will also get a pro-rata bonus for 2019. This has amounted to around $100,000 the last two years.

The restricted stock units that Mr Meche holds will be forfeited. However outstanding performance awards will remain valid and will pay out, provided certain targets are met.

The CFO of the company is Wes Stockton. He joined in September 2018.