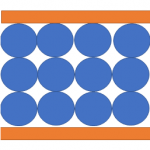 Carbo Ceramics has been delisted from the New York Stock Exchange (NYSE) because its share price is too low. It was trading at 30 cents (market cap $9 million) at the time of the delisting. Going forward, it will be traded over the counter.

The company has its head office in west Houston and makes proppants, primarily for fracking.  It started out making ceramic proppants and went public in 1996. At its peak in 2011, the company had a market capitalization of almost $4 billion. Ceramic proppants are considerably more expensive than natural sand. Although the company tried to protect itself by supplying natural sand as well, it has been hit hard by the downtown.

In November, the company disclosed that its largest customer planned to discontinue purchases of frac sand under its existing contract. (Its two biggest customers in 2018 were Halliburton and Keane Group). The company has significant fixed costs associated worth this contract such as rail car leases and a distribution facility. The company estimated that it will incur $8 million to $10 million in cash costs to exit these leases and other supply contracts, associated with the contract. As a result, the company issued a going concern warning.

The company has not made positive annual EBITDA since 2014.  At the end of September, the company had cash balances of $40 million. Against that, it has a fully-utilized $65 million credit facility with the Wilks Brothers (who sold their pressure pumping business in 2011 for $3.5 billion) that matures in December 2022. It also has leases with a present value of $58 million.

You can see the complete, updated list of Houston-area public companies here