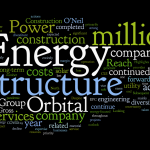 Orbital Energy Group has relocated its corporate office from near Portland, Oregon to Houston. This follows the recent appointment of a new Houston-based CEO. The company used to be called CUI Global until the recent name change. The new head office is in the Greenspoint area of North Houston.

The CEO is Jim O’Neil. He was appointed a non-executive director in July 2019 and became CEO in October.  He spent 17 years at Houston-based Quanta Services, including five years as CEO before leaving in March 2016.

Not surprisingly, the company is pivoting to an energy infrastructure services company, like Quanta. It sold its power equipment manufacturing division for $35 million in two separate transactions in late 2019.  Then, in April 2020, it acquired Reach Construction, an engineering company that specializes in utility-scale solar power construction. The acquisition is based in North Carolina and was bought for an initial price of $37 million.

The remaining legacy business is Orbital Gas Systems which provides gas engineering solutions to utilities and other industries. It has operations in Houston and Staffordshire, UK. The company also recently started Orbital Power Systems, based in Dallas. This is an engineering and construction company specializing in electric transmission and distribution in the Southwest US.

The CFO is Daniel Ford. He joined the company in 2008 and is based in Portland.

Orbital (ticker OEG) currently has a market cap of $23 million and no debt. (The seller financed nearly all of the Reach acquisition price). The CEO stated that he expects to make 2-4 acquisitions a year.

I have added Orbital to the list of Houston-area public companies. You can see the complete list here.