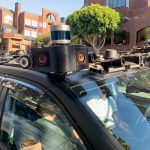 Graf Industrial Corp, which went public in October 2018, has announced that it has entered into a reverse merger agreement with San Jose-based Velodyne Lidar. Velodyne makes radar-like sensors used in autonomous vehicles. In 2005 it invented a real time 3D Lidar ( Light Detection and Ranging).

Velodyne was founded by David Hall and is backed by Ford, Baidu, Nikon and Hyundai Mobis. They will continue to own 80% of the combined company after the deal closes in the third quarter.

The proforma enterprise value of the combined entity is $1.6 billion. Graf will issue $1.5 billion in new stock to existing Velodyne shareholders. Cash sitting on the Graf balance sheet ($117 million) and from the issuance of $150 million of new shares to institutional investors will be used to add $190 million of cash to Velodyne’s balance sheet and to pay $50 million to the existing Velodyne shareholders.

Graf is based in NW Houston and was formed by blank check veteran James Graf. A blank check company is a company that goes public without any underlying business. Normally it has 18 months to make an acquisition, otherwise the money has to be returned. However, a company can ask its shareholders for an extension.

Back in April, just before the proxy vote requesting an extension, Graf announced it was in negotiations to buy Purecycle, a PE-backed polypropylene recycling company in Ohio. Purecyle is developing technology (under license from Proctor and Gamble) that takes contaminated plastics and converts it into a reusable resin on a commercial scale. It’s not clear why this deal fell apart.

Earlier this week, the other Houston blank check, Landcadia Holdings II announced it would be buying Golden Nugget Online Gaming.