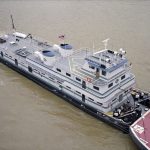 Kirby Corporation is restating its first quarter results following an error it made in its goodwill impairment charge. Instead of a pre-tax charge of $260 million, it should have booked a charge of $388 million. After taxes, the net income loss increased by $99 million.

Kirby is the largest domestic tank barge operator, transporting bulk liquid products. It also provides after-market services and parts for engines, transmissions and gears. Just over half of these parts are sold to oilfield service and E&P companies. The company has its head office just west of downtown Houston.

The goodwill impairment occurred in its distribution and services segment and was a result of the dramatic decline in its share price during the first quarter. The company was tripped up by revisions the Financial Accounting Standards Board (FASB) made in the process of testing for goodwill impairment. These revisions came into effect at the beginning of 2020 for Kirby.

In certain circumstances when performing a goodwill impairment test a company can get into a circular logic loop. If the fair value of a reporting unit is below the carrying value, triggering an impairment, a deferred tax asset (arising from the book/tax differences in the treatment of goodwill) can increase in value, causing an additional impairment. This causes the deferred tax asset to increase, triggering more impairment. To address this, in the new guidance, FASB mandated the use of a simultaneous equation to solve the problem.

Kirby did not perform the simultaneous equation in its initial accounting for the impairment loss.

Kirby stressed that the impairment was a non-cash item and had no impact on EBITDA. While that is technically true, I often find such explanations disingenuous when companies use them.

Kirby didn’t specify which acquisition was the primary cause of the impairment. The likely culprit is the acquisition of Stewart & Stevenson in September 2017. Kirby paid $758 million for the business that included $331 million of goodwill and $155 million of intangible assets. It paid for the business with $378 million in cash and the rest in stock.  It sounds like Kirby has written off all the goodwill and intangible assets from that business. Operating margins in the Distribution and Service segment have fallen from 10% in 2017 to 5% in 2019 and 1.5% in the first quarter of 2020.

In other words, Kirby massively overpaid for Stewart & Stevenson. Ultimately, it’s the shareholders who pay for that profligacy.