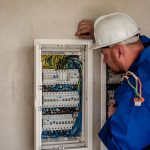 Gary Matthews has resigned as the CEO of IES Holdings, Inc. He was in the role for 18 months. He has also resigned from the Board of Directors. Jeff Gendell, Chairman of the Board, and effectively the majority shareholder, has been appointed interim CEO.

IES has its head office in the Galleria area. It provides electrical contracting and other infrastructure services to a variety of end markets. It has approximately 5,400 employees.

The company is doing reasonably well currently. For its most recent quarter, it had revenues of $291 million and an operating profit of $9.2 million. It had record backlog and most importantly, a net cash balance of $15 million.

Resigned or pushed out?

The company didn’t state whether Mr Matthews would get a severance or what would happen to his outstanding stock awards. In fact the most recent proxy statement didn’t include a table listing potential payments in the event of a departure of an executive. Previous proxy statements filed by IES have.

Mr Matthews, who joined the company from Morgan Stanley Capital Partners, had a base salary of $650,000. As of September 2019, he had about $1.6 million in equity that had not vested.