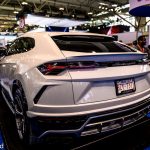 Lee Price III, who lives in NW Houston, has been charged with fraudulently obtaining more than $1.6 million in Paycheck Protection Program (PPP) loans. He allegedly spent the money on having a good time, including $233,337.60 on a 2019 Lamborghini Urus.

In case you are thinking that you read about this case last week, no, that was a Florida man who used his PPP funds to buy a $318,000 Lamborghini Huracan.

According to the criminal complaint, Price has a felony conviction for forgery (2010) and for robbery (2010). He is also currently a defendant in Harris County, where he is charged with the felony offense of tampering with a government record.

Price purported to be an executive of Price Enterprise Holdings, Price Logistics Services and 713 Construction LLC. Although these entities exist, they have never filed with the Texas Workforce Commission. That means they have not hired employees or paid unemployment taxes.

Price made six applications for PPP funds. However only two were funded, namely;

For the loan financed by Harvest, Price filled out the forms using the name of an elderly man who had died a month before. On this application, Price had an unnamed co-conspirator, who received $250,000 of the funds received.

Wine, women and song (…and an office lease)

For the funds received from Harvest, the complaint alleges Price bought a 2020 Ford F-350 for $85,000 and leased a luxury apartment in midtown Houston. $85,000 was also withdrawn in cash.

Price becomes the third Houston-area man to be charged with fraud in connection with PPP loans. A Funeral Director was charged in June. A 29-year old man (same age as Price) was charged in July.