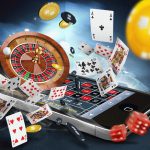 Landcadia II went public in May 2019. GNOG was a subsidiary of Landry’s the restaurant and casino business owned by Mr. Fertitta.

Currently GNOG is involved in online casino gaming in New Jersey, where it has a 13% market share. It is planning to expand into Pennsylvania, Illinois, Michigan and West Virginia, where online betting is now legal. It is not planning to enter the sports betting market, where DraftKings is dominant. GNOG may be precluded from betting on NBA games as Mr. Fertitta also owns the Houston Rockets.

Landcadia II is paying $542 million for GNOG., This includes $314 million in equity, $30 million in cash and $150 million repayment of debt owed by GNOG. There is also $48 million of consideration in the form of debt repayment fees and a tax receivable agreement. GNOG is also taking on $300 million of debt which was used to fund a capital distribution to an affiliate of Mr. Fertitta.

Mr. Fertitta owns 11.3% of the equity post-close. However, due to the dual class structure, he owns 79.9% of the voting rights. Jefferies, the financial partner of Mr. Fertitta, received a $11.1 million underwriting fee as a result of the transaction. It will also receive fees of $3.75 million for being the exclusive financial and capital markets advisor.

Mr. Fertitta will serve as the Chairman and CEO of GNOG. Thomas Winter will be the President. He joined Landry’s in 2013 as the General Manager of the online gaming division He has a lot of experience in online gaming gained in Europe.

Michael Harwell will be the CFO, subject to gaining regulatory approval from the New Jersey Division of Gaming Enforcement. He was the Chief Accounting Officer of Independence Contract Drilling until May 2020.  However, he worked for Landry’s for seven years prior to that.