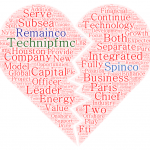 TechnipFMC has announced that its plan to split into two is back on. The company first announced the split in August 2019 but put it on hold in March 2020 at the height of the pandemic.

The company intends to spin off 50.1% of its Engineering and Construction arm into a new public company called Technip Energies. This will have its headquarters in Paris and be listed on Euronext Paris.

Bpifrance, a 5% shareholder currently, has agreed to invest $200 million in Technip Energies to buy part of TechnipFMC’s remaining 49.9% stake. The ownership stake acquired will depend on average price of the shares of Technip Energies in the first 30 days after spin-off

The remaining business, primarily the production business that was formerly part of FMC, will still be called TechnipFMC and be headquartered in Houston.

The company has disclosed that Technip Energies will be spun off with net cash of $2.7 billion. TechnipFMC will have $1.7 billion of net debt. The current market cap of the combined business is $5.25 billion.

FMC Technologies and Technip announced plans to merge in May 2016 and completed the merger in 2017. The total purchase price was $8.2 billion, including $5.2 billion of goodwill. Since the acquisition, the company has written off $3.4 billion of goodwill, though not all of that relates to the merger

The company expects the separation to be completed in the first quarter.