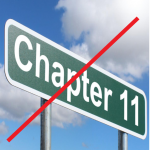 In the past few days, three Houston-area companies that were publicly-traded have exited Chapter 11 bankruptcy.

Francesca Holdings, the boutique retailer, filed for bankruptcy in December. It auctioned off its assets to TerraMar Capital and Tiger Capital. Together they bought the assets for $18 million in cash plus $1.25 million due at the end of the year. They plan to keep open 275 stores out of a total of 461.  The company appointed a wind-down officer to liquidate the remaining assets.

Cindy Thomason, the CFO of Francesca Holdings, has been appointed the CFO of the newco that is operating the ongoing stores.

Superior Energy Services also filed for bankruptcy in December, though it announced a Restructuring Support Agreement three months earlier. The oilfield services company converted $1.3 billion of debt into equity. It exited Chapter 11 free of debt and $242 million in cash. A new Board of Directors was appointed, but the existing management team was retained.

Prior to filing, the old Board agreed pay $7.3 million in retention bonuses to the six executive officers of the company. CEO David Dunlap got $3.2 million, while CFO Westy Ballard got $1.1 million. The bonuses will be paid in September 2021.

Noble Holding Corporation, the drilling contractor, filed in July 2020. The company technically has its head office in London but its operational headquarters are in Sugar Land. $3.4 billion of unsecured debt was exchanged for 86% of equity in the newly-reorganized company. The company leaves Chapter 11 with $216 million of second lien notes and $178 million drawn on a new $675 million revolving credit facility.

As with Superior, a new Board of Directors was appointed but the existing management team was retained. However, former CEO and Executive Chairman Julie Robertson resigned. She received a $3.75 million lump sum payment when she transitioned to the Chairman position in March 2020.