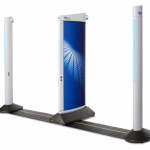 NewHold Investment Corp will take Evolv Technology public in a transaction that values the business at $1.25 billion. Evolv is a leader in AI touchless security screening with its head office in the Boston area.

The technology uses artificial intelligence and data science to screen people for weapons and other threats. The company says its platform eliminates the need for devices like metal detectors and physical security checks. It is used at venues such as Six Flags amusement parks, the Lincoln Center in New York and at the stadiums of the New England Patriots, Chicago Cubs and Manchester City.

Evolv has some high profile backers. Bill Gates is a shareholder and the $300 million stock private investment (PIPE) will include investments from Peyton Manning, Andre Agassi, Steffi Grafi, Joe Torre and Theo Epstein.

Customers pay a monthly subscription for using the service, rather than buy hardware. In 2020 the company had 209 units deployed, generating revenues of $4.3 million. It lost $26 million at the EBITDA level. However, the company projects it will have over 8,000 units deployed by 2025 and revenues of $595 million.

NewHold raised $150 million in an IPO in July 2020. The deal is expected to close in the second quarter.