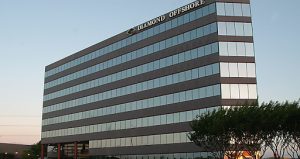 Diamond Offshore Drilling has put itself up-for-sale. The company has retained Goldman Sachs as its financial advisor.

The offshore driller has its head office in west Houston and owns four drillships and eight semisubmersibles. It exited Chapter 11 bankruptcy in April 2021, having converted $2 billion debt into equity. For 2020, it had revenues of $733 million and its shares currently trade over-the-counter.

In May, the company appointed Bernie Wolford as its CEO. He was formerly the CEO at Pacific Drilling and Senior VP – Operations at Noble Corporation.

In the words of the press release, the company has appointed an independent committee ‘to explore strategic alternatives to maximize shareholder value. These alternatives may include, among other things, continuing as a standalone public company, pursuing asset acquisitions or entering into a business combination with a strategic partner.’

There has been a fair amount of restructuring and consolidation among the offshore drillers in recent months;

Everybody except Transocean has recently exited bankruptcy. In all cases, bondholders wrote off a lot of debt in return for equity. Many of them are pushing for consolidations so they can realize their investments and maybe, over time, claw back some of the losses.

1 thought on “Diamond Offshore puts itself up for sale”