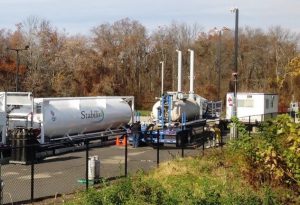 Stabilis Solutions has appointed Westy Ballard as its new CEO, replacing Jim Reddinger. In addition, the company founder and executive chairman, Casey Crenshaw, will become non-executive chairman of the Board.

Stabilis is based in West Houston and is a small-scale producer and distributor of Liquified Natural Gas. It went public in July 2019 when it completed a reverse takeover of another Houston company, AETI, but was delisted four months later for not having enough publicly-held shares. It was finally relisted in April 2021.

Westy Ballard was previously the CFO at Superior Energy Services, a Houston-based oilfield services company. Superior was publicly-traded until it filed for bankruptcy in December 2020. It exited in February 2021 and Mr. Ballard left six weeks later. As an aside, Superior today announced that it has removed the interim tag off CFO James Spexarth.

Mr. Reddinger, joined the company in 2013 as CFO and was appointed CEO in November 2018. He will continue to receive his salary of $500,000 until the end of the year. His restricted stock units will also vest (market value $3.3 million).