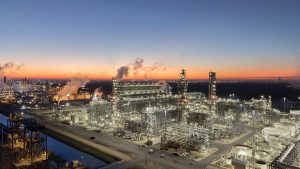 Chevron Phillips has agreed to spend $118 million to reduce harmful air pollution at three Texas plants, including one in the Houston-area. The company has also agreed to pay $3.4 million in a civil penalty. This is part of a settlement reached with the Justice Department.

Chevron Phillips is a joint venture between Chevron and Phillips 66 that has its head office in The Woodlands. The company was formed in 2000 by merging the chemical operations of the two companies. In 2021 the company had revenues of $14 billion

The three plants are Cedar Bayou in Baytown, Sweeney and Port Arthur.

Companies are allowed to vent gases in a flare stack as a control device in a petrochemical plant. Combustion of the gases must occur in the flare stack. For that reason, the flares must have monitoring equipment. Many flares use steam to assist in combustion by promoting turbulence in a flare’s flame. The steam-to-vent gas ratio must be calculated. Too much steam snuffs out the flame, and too little causing excessive smoke. In either case, air pollutants escape.

The Justice Department alleges that the company regularly ‘oversteamed’ the flares, allowing harmful gases (including benzene) to escape.

The company has agreed to install a gas recovery system, by September 2023, at Cedar Bayou that will allow the gases to be recycled, instead of being combusted in a flare. At the other two plants, ChevonPhillips will amend its air quality permits to limit the flow of gas at selected flares. The company will also create waste minimization plans at all three sites.

In October last year, in a similar settlement, LyondellBasel agreed to spend $50 million to reduce flaring at six facilities, including four in the Houston area.