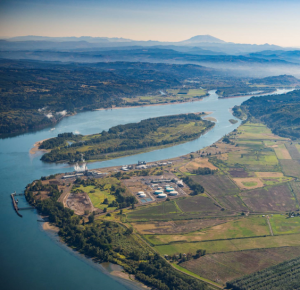 Industrial Tech Acquisitions II, a Houston SPAC, has agreed to take NEXT Renewables Fuels public in a transaction worth $530 million. NEXT, founded in 2016, is also based in Houston. Upon closing, the business will be renamed NXTClean Fuels.

NXT is in the process of developing a 50,000 barrel-per-day refinery in Port Westward, Oregon that will produce renewable diesel (‘RD’) and sustainable aviation fuel (‘SAF’).

Renewable diesel is made from feedstock products such as vegetable oils, animal fats, used cooking oil and distillers corn oil. It uses the same source oils and fats as biodiesel. However, the refining process is different from biodiesel. The process is more capital-intensive, but RD is chemically equivalent to petroleum diesel and can be transported in petroleum pipelines.

Likewise, the refining process to make SAF is similar to regular jet fuel, except for the source feedstocks.

NXT expects the permitting of the Port Westward refinery to be granted by late 2023 with initial operations starting in mid-2026. The construction cost is currently $2.7 billion. (NXT’s own website shows a start date of 2024 and a construction cost of $2 billion, though this date and cost appear to be from June 2021).

The company aims to select an EPC (Engineering, Procurement and Construction) Contractor by the end of the year. Fluor is the frontrunner, as they have performed the engineering work so far for the company.

NXT has an agreement with BP, who will supply 100% of the feedstocks for at least 5 years. It also has offtake agreements with Shell and Chevron. United Airlines, through its venture arm, has invested an initial $2.5 million in NXT. This investment could rise to $37.5 million, assuming certain milestones are met.

In its first full year of operation in 2027, the company is projecting revenues of $3 billion and EBITDA of $1 billion.  Half of the revenue will be generated from the sale of credits that arise from the Renewable Fuel Standard, enacted by Congress in 2005.

In the transaction, NXT will have an enterprise value of $530 million. It will also have $156 million of cash on its balance sheet.

The CEO of NXT is Christopher Efird, an entrepreneur and investor who has led, or co-led the investment into 29 growth stage businesses. Many of those later went public.

David Kane, based in Las Vegas, currently serves as the CFO of NXT, though his title is Senior VP and Controller.  He has been the CFO at a number of small and medium sized companies in California and Nevada.

Industrial Tech Acquisitions II went public in January 2022. It raised $173 million and is the 2nd SPAC run by Scott Crist. The first SPAC took Arbe Robotics public in October 2021. Arbe is an Israeli company developing 4D automotive imaging radar. Arbe’s shares are trading at $4.00, compared to $8 when it went public.