James Camp has been charged with $10 million fraud from his former employer, Lubrizol Corporation, based in Deer Park.

The 10-count indictment for wire fraud was returned in the Southern District of Texas. The indictment remains under seal. Therefore many details of the scheme have not been released.

Lubrizol is a provider of specialty chemicals. It was a public company until it was acquired by Berkshire Hathaway in 2011. Its corporate head office is in Ohio.

Mr Camp allegedly defrauded the company of $9,256,713 between April 1998 and November 2017. Camp submitted fraudulent invoices for laboratory services from two companies he owned. He then allegedly caused Lubrizol to issue payments to those companies. The indictment further alleges that he used the fraudulently obtained payments for his own personal benefit.

If convicted, Camp faces up to 20 years imprisonment on each count as well as a possible $250,000 fine.

Omega Protein Corporation has settled with the Securities and Exchange Commission (SEC) over allegations that it misrepresented that it was in compliance with covenants on its loan agreements.

The company has agreed to pay a penalty of $400,000. Omega settled without admitting or denying the findings in the SEC order

Omega, which had its head office in west Houston, was publicly traded until it was taken over by Cooke Inc, a private Canadian company, for $500 million in December 2017.

The company’s biggest business is the production of fish oil for use as a protein ingredient in animal feed. It has facilities in Virginia, Mississippi and Louisiana. Historically, a significant source of Omega’s external financing was the federal government, which provided loans as part of a broader program to support the national fishing and acquaculture industry.

Omega had been a repeat offender of the Clean Water Act. It had pleaded guilty to criminal charges in 2013 over pollution in Reedville, Virginia. The company paid a fine of $5.5 million. It also made a $2 million payment to the National Fish and Wildlife Foundation.

In January 2017, it again pleaded guilty to criminal counts of pollution through illegal discharges at its Abbeville, Louisiana facility. This time the fine was $1 million.

The pollution in Louisiana actually occurred in December 2014. A whistleblower called the company ethics hotline in March 2015. This was before the company filed its annual report. However senior management only became aware of it a month later. This was because the hotline system Omega had put in place failed to notify the appropriate executives.

As part of its 2014 annual report, the senior management of the company certified that it was in compliance with all environmental obligations. That was a covenant put in place on the federal loans after the first guilty plea.

The subsequent quarterly reports for 2015 also falsely claimed that the company was in compliance. In fact the company would have had to pay accelerated interest on its $21 million federal debt, if a default had been declared.

Quanex has a market cap of $558 million and is based in the Galleria area. The company designs and produces energy-efficient windows and doors fenestration products in addition to kitchen and bath cabinet components.

Mr Zuehlke has been with the company since 2016. Prior to that, he was VP, Investor Relations at Halcon Resources.

RiceBran Technologies (market cap $91 million), based in The Woodlands, has appointed Todd Mitchell, as its new CFO. He replaces Dennis Dykes, who has resigned.

RiceBran processes and markets value-added products derived from rice bran to food and animal nutrition manufacturers and retailers. A year ago, it moved its corporate head office from Sacramento to The Woodlands to be closer to Arkansas and Louisiana, the major rice-growing region of the US.

Mr Dykes had joined the company in 2014 and was appointed to the CFO position in October 2018. He replaced Brent Rystrom who was promoted to the CEO position. It’s not clear whether Mr Dykes will receive any severance.

Mr Mitchell joins from Park City Group, where he was the CFO. Park City is a publicly traded software-as-a-service provider, based in Salt Lake City. Prior to joining Park City in 2015, Mr Mitchell spent many years working as an analyst on Wall Street.

Park City issued a press release yesterday, stating that Mr Mitchell had resigned to accept another opportunity that will allow him to spend more time closer to home in New York. (Technically The Woodlands is closer to New York than Salt Lake City!)

Mr Mitchell will receive a base salary of $235,000. He was also granted 125,000 restricted stock awards. He also receives a $10,000 relocation allowance which suggests he is not permanently relocating to The Woodlands.

Mr Atanasov joins from Empire Petroleum Partners in Dallas where he had been CFO since February 2016. Prior to that he was the CFO at NGL Energy Partners in Tulsa and spent 9 years at GE Capital.

Mr Atanasov replaces Steve Tremblay, who left in November 2018 after 10 years as the CFO. Mr Tremblay received a severance payment of $0.8 million.

After Mr Tremblay left, Chris Russell, the Chief Accounting Officer, was appointed as the interim CFO. With Mr Atanasov’s arrival, he will revert to his previous role.

Kraton has been suffering from a high debt load ($1.5 billion) following its January 2016 acquisition of Arizona Chemical for $1.3 billion in cash. The acquired business hasn’t performed as well as expected.

In February Kraton announced it is considering selling its Cariflex business (revenues $180 million) which makes a synthetic alternative to natural rubber latex.

There is currently a class action lawsuit against the current CEO and former CFO. It alleges that, in 2015 they told investors that they would save $70 million annually by completely overhauling the manufacturing process for Cariflex. This would involve a new proprietary technology that would allow production to be streamlined at a plant in Brazil. The lawsuit alleges that the CEO and former CFO didn’t tell investors about production problems in the manufacturing process. while selling $11 million of stock for personal gain.

Ipsco Tubulars, a pipe maker that was planning an Initial Public Offering, has instead been sold to Tenaris, which has its head office in Luxembourg, for $1.2 billion.

Ipsco has its head office in NW Houston and is subsidiary of PAO TMK, a Russian company. TMK bought the assets of IPSCO for $1.7 billion through a two-part transaction in 2008 and 2009.

Ipsco originally filed for an IPO in January 2018. It had planned to raise $500 million by offering 23.3 million shares at a price range of $20 to $23. That would have valued the company at $1.3 billion. Unfortunately, on the day they were due to price in February 2018, the Dow fell 1,000 points and they postponed the IPO.

In December 2018, they updated their prospectus with the aim of trying again. They hadn’t yet filed revised terms before the announcement by Tenaris.

Tenaris was virtually no presence in Texas until it bought St Louis-based Maverick Tube for $2.4 billion in 2006 and Houston-based Hydril for $2.1 billion the following year.

For the nine months ended September 30, 2018, Ipsco had revenues of $1.1 billion and adjusted EBITDA of $124 million. Both of those numbers are up 50% on the corresponding period in the previous year.

The 25% tariffs imposed by President Trump on imported steel enabled Ipsco to raise prices to its customers. Its primary material input for its seamless steel pipe is steel scrap. Prices for scrap were not significantly affected by the tariffs, allowing Ipsco to expand margins. However, the tariffs caused Ipsco to reduce imports sourced from its Russian parent.

Tenaris recently completed a new $1.8 billion pipe mill in Bay City and thus increased its local competition to Ipsco. For these reasons, it appears the parent company decided they were better off selling Ipsco than going through with the IPO. 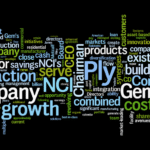 The corporate office will relocate from NW Houston to Cary, North Carolina.

(UPDATE 1-7-2019 : NCI announced that Shawn Poe is stepping down as CFO, effective May 2019. The company has launched a search for his successor).

Clayton, Dubilier & Rice, a PE firm based in New York, owned 34% of NCI. They originally gained a 68% stake in NCI in 2009 as part of a financial restructuring and gradually reduced their stake since then, through various means. In April 2018  CDR acquired Ply Gem and concurrently merged it with Atrium Windows and Doors. After the merger, they now own just under 50% of the combined business.

The stock price of NCI was $20.70 at the time the deal was announced. It is now trading at $11.19. That means that the enterprise value of Ply Gem has dropped from $3.7 billion at acquisition to $3.2 billion at closing.

Bob Gwin, the CFO of Anadarko, an E&P company (market cap $28 billion) was promoted to President. He will be responsible for leading worldwide operations and project management and next-generation technology development and systems solutions. Ben Fink, currently the CEO of the Western Gas Partners division, becomes the CFO.

Steve Tremblay, the CFO of Kraton Corporation, a chemical manufacturer, (market cap $836 million) left the company with immediate effect. He will receive a severance payment of $1.6 million and approximately $3 million in accelerated vesting of equity awards. Christopher Russell, the company’s Chief Accounting Officer, will serve as the interim CFO.

Brian Small, the CFO of Cactus, an oilfield services company,  (market cap $1.1 billion), said he would step down as CFO and become Senior Finance Director, effective March 2019. Steve Tadlock is appointed as the new CFO. He joined the company in June 2017 as VP of Corporate Services. He previously worked at Cadent Energy Partners. Cactus went public in February 2018. Mr Small has been CFO since 2011.

The CFO at another company that went public in February 2018 also stepped down. Mike McCabe, CFO of Alta Mesa, an E&P company (market cap $384 million) announced his retirement. He will stay on while the company searches for a replacement. Mr McCabe joined the company in 2006. Alta Mesa went public via a reverse takeover by Silver Run II, a blank check company.

Following the completion of the takeover of Gulfmark Offshore by Tidewater (market cap $700 million), the Tidewater CFO,  Quinn Fanning, has been replaced by Gulfmark CEO, Quintin Kneen. Mr Fanning had been CFO of Tidewater since 2008. It’s not clear what Mr Fanning will receive in severance payments.

Following its carve out from Apache Ben Rogers becomes the CFO at Altus Midstream after its reverse takeover by Kayne Anderson, a blank check company.

Powell Industries (market cap $341 million) has hired Mike Metcalf as its new CFO. He joins the company immediately and will assume the role of CFO once the annual report for the year ending September 2018 is filed. At that point, existing CFO Don Madison will retire.

Powell designs, manufactures and services custom-engineered equipment for the distribution, control and monitoring of electrical energy. It has its head office in SE Houston, near Hobby Airport.

Mr Metcalf joins from GE where he has worked for 20 years. He was the CFO of GE Oil & Gas Supply Chain from 2011 to 2015, the CFO of the Artificial Lift division of Baker Hughes, a GE company and most recently the CFO of Aeroderivative Products, part of GE Power.

Mr Metcalf will receive a base salary of $325,000 as well as a signing bonus of $100,000. He also signed an employment agreement that states he will receive his base salary for 2 years, if he is terminated without cause (3 years if this occurs after a change of control).

Back in May, Mr Madison announced his intention to retire. He had been the CFO since 2001.

Graf Industrial, a blank check company based in NW Houston, has completed its Initial Public Offering (IPO). The company raised $225 million by offering 22.5 million units at a price of $10, in line with the offering terms.

Graf was formed earlier this year by blank check veteran James Graf. It intends to buy an industrial business in the US or Canada worth $1 billion. Mr Graf has served as a founder and executive officer or director of 4 special purchase acquisition companies (SPAC).

The units of the company are now listed on the NYSE under the symbol GRAF.U.

The company is the first Houston-area business to complete an IPO since Spirit of Texas Bank, back in May.