Back in February, Shell had offered $12.89 for each common unit in a zero-premium bid.

Many years ago, Master Limited Partnerships were in vogue and it was the fashion for E&P companies to spin off their midstream assets into publicly-traded MLPs. Shell were fashionably late in that they only spun off Shell Midstream for $23 per unit in October 2014, right before the crude oil price crash.

That crash laid bare the claim that MLPs had low risks and therefore low cost of capital. In addition, the tax rules changed in 2018 reducing the benefits of MLPs. Most publicly-traded MLPs have already been taken private by their sponsor. Why pay a dividend of 8% on a MLP when you can bring it inhouse by borrowing at 5%?

The transaction has been approved by the Conflicts Committee but most minority investors remain unhappy as they believe that the deal undervalues the company, particularly as some of the midstream assets were damaged by Hurricane Ida in 2021.

The transaction is expected to close in the fourth quarter of 2022.

Marc Stratton, the CFO of Summit Midstream will be stepping down, effective March 4, 2022. He will be replaced by Bill Mault, who is currently VP Corporate Development, Finance and Treasurer.

Summit has its head office in downtown Houston and operates midstream assets in the Utica, Williston, DJ and Permian Basins. It went public in 2012 and had a peak market capitalization of $1.9 billion in 2014. Its current market cap is $243 million.

The company appointed a new CEO, Heath Deneke, in August 2019 and last year, it completed a refinancing that replaced a lot of debt that was due to mature in 2022. The company still has $1.4 billion of debt. It expects to pay down $130 million or so this year.

Mr. Mault joined the company in 2016 and has a background in investment banking. He will receive a base salary of $300,000.

The company also announced it was promoting Matt Sicinski to Senior VP and Chief Accounting Officer. He joined in February 2020, having previously worked at Venari Resources and Southwestern Energy.

BP Midstream Partners (BPMP), based in west Houston, is to be re-acquired by its parent, BP, in an all-stock transaction. Each unitholder will receive 0.575 of an American Depositary Share of BP for each public common unit owned. At the current price of the ADRs, that amounts to $14.89 per unit

Back in August, BP offered to buy BPMP common units at $13.01 per unit. BP currently owns 54.4% of the outstanding BPMP units.

BP Midstream was spun off by BP only in October 2017 at $18 per unit. That was a few years later than many of its competitors. In fact, the trend to re-acquire them started shortly thereafter in 2018.

Phillips 66 has agreed to buy its publicly-traded MLP partnership, Phillips 66 Partners for $3.4 billion in an all-stock deal. This continues the recent trend of MLP’s being brought back in-house.

The partnership was originally spun off in July 2013. At the end of last year, Phillips 66 owned 74% of the common units of the partnership, and controlled the general partnership that managed the MLP. 98% of the revenues of the MLP were generated from Phillips 66.

Phillips 66 signaled back in February that it was considering a takeover of the MLP.

Companies spinning off their midstream assets into a separate master limited partnership was all the rage about 10-15 years ago. It was sold to retail investors as a high-yield, low risk play. Unfortunately that proved not to be the case, as many entered the energy downturn in late 2014 too highly leveraged. That led to distribution cuts and the sector fell out of favor. (The Phillips MLP has not cut its dividend since it has been a public company).

In addition, in some cases, the retail unitholders suffered at the hands of the controlling general partner.  The tax reform legislation passed in 2017 also reduced the tax benefits that MLPs receive.

The transaction is expected to close in the first quarter of 2022.

Crestwood Equity Partners has agreed to buy fellow Houston company, Oasis Midstream Partners, for $1.8 billion. $160 million will be paid in cash, the rest in stock. Oasis will own about 22% of Crestwood after the deal goes through.

Oasis Midstream was spun out of Oasis Petroleum in September 2017. Its assets are primarily midstream assets in the Williston Basin in North Dakota. There are also a few assets in the Delaware Basin. In 2020, it had revenues of $347 million. Of that, 97% were generated by Oasis Petroleum.

Oasis Petroleum has a 67.5% limited partner interest in Oasis Midstream. The parent entered a pre-packaged bankruptcy in late 2020. After exit, its founder and CEO retired, and it sold its Permian Basin assets for $481 million to become a pure-play Bakken E&P operator.

Crestwood already has 796 miles of pipeline in the Bakken and 311 miles in the Delaware Basin, plus related infrastructure. It also has assets in the Marcellus, Barnett and Powder River Basins.

Crestwood expects to generate $25 million in cost savings from operations and general and administrative expenses. 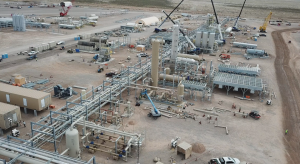 Altus Midstream, based in Houston, has agreed to taken over by privately-held EagleClaw Midstream. The deal is an all-stock transaction that values the combined business at $9 billion enterprise value.

Prior to the transaction, Altus was 79% owned by Apache (now called APA Corp). After the transaction is completed in Q1 2022, the current majority shareholders of EagleClaw, Blackstone and I Squared Capital, will own 75%. Apache will own 20%, and existing Altus public shareholders will own about 5%.

Altus was spun off from Apache in November 2018 when it went public after being acquired by a SPAC or blank check company. At that time, it had a market capitalization of $3.5 billion. Currently, it has a market cap of $1.4 billion. That’s after the recent run-up in the stock price from $65 in late September to $86.53 right before the deal was announced.

The poor share performance since Altus went public is a result of the disappointing results of the Alpine High project of Apache. It was announced with great fanfare in 2016. The field turned out to have more gas than oil. In 2020, Apache wrote off $1.4 billion and Altus $1.3 billion from the assets values related to the project. Ironically, the recent rise in gas prices should lift prospects for Alpine High.

Four months after Chevron acquired Noble Energy, it has submitted a non-binding proposal to acquire all the publicly-held common units of Noble Midstream Partners LP (‘NBLX’).

Chevron already owns 62.5% of NBLX, through its acquisition of Noble Energy. It is also the biggest customer of NBLX, with about 60% of revenues generated from Chevron. So the deal is going through, it’s just a question at what price.

Chevron’s proposal was $12.47 per common unit, which meant no premium to the closing price on February 4. NBLX’s price ended up at $13.30 the following day, suggesting the market expects Chevron to sweeten the pot.  A year ago, the units were trading at $22 per unit.

This continues the trend of publicly-traded MLP’s being reabsorbed into their former parent companies. Other Houston-area examples in recent years are;

[UPDATE March 2, 2021 – Deal has now been completed and TC Pipelines has been delisted].

Houston-based TC Pipelines, LP is to be acquired by TC Energy which controls the General Partner that manages TCP. TC Energy also owns 24% of the common units of master limited partnership.

This is part of a trend in recent years where MLPs have been taken back in-house. Once owners and investors realized that MLPs were not really like a risk-free utility, the cost of capital rose and the attractions of being publicly-traded faded.

The deal values TCP at $1.68 billion or $31 per common unit. The 52-week high was $41. Once again, minority unit holders will feel aggrieved that the controlling owner has chosen to act when the stock price has been depressed. However, the offer price does represent a rise from the $27.31 that TC Energy originally proposed back in October.

TCP was formed by TransCanada in 1998 and went public the following year in a $275 million Initial Public Offering.  The company has interests in 6,300 miles of natural gas pipelines, mainly in the Great Lakes region and the Pacific Northwest.

The deal is expected to close around the end of the first quarter of 2021.

Michael Pearl, the CFO of Western Midstream Partners, will be leaving the company, although the company didn’t say when! Michael Ure, the current CEO, is taking over the CFO duties until a successor is identified.

Western Midstream is a master limited partnership that went public in 2008 as a subsidiary of Anadarko. It’s now owned by Occidental, following its takeover of Anadarko last year. It has its head office in The Woodlands.

In August 2019, ahead of his proposed appointment, Mr Pearl entered into a retention agreement that provided for three cash payments of $261,000 each, to be paid in February 2020, August 2020 and February 2021. If he was terminated without cause, the unpaid amounts would vest. In signing the retention agreement, Mr Pearl waived his right to additional severance payments.