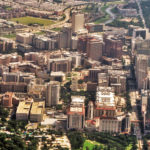 Jobs in Houston in 2019 grew by 1.6 percent (49,000 jobs).  This is according to the latest economic indicators published by the Federal Reserve of Dallas. That rate is actually below the metro’s historical average of 2.1 percent.The main sectors to change were:

The Houston unemployment rate dropped slightly to 3.7 percent in December. That’s above the Texas and US rates (both 3.5 percent).

According to NAI Partners, the overall Houston office vacancy rate stood at 21.1 % at the end of December. That is down 0.7 per cent on the previous quarter, but up slightly year-on-year. The market actually absorbed 843,000 sq ft in 2019, the highest yearly figure since 2014. This was overshadowed by the 1.7 million sq ft of new office space coming onto the market. Currently, a further 3.3 million sq ft is under construction (38% spoken for).

Houston’s industrial vacancy rate at the end of December was 6.9% (41 million sq ft) , up 1.5% on a year ago. The rising vacancy rate was also caused by 9.6 million sq ft of new construction completed in 2019.

Houston jobs grew 3.1 percent annualized over the three months ending in July. Construction increased by 6,500 jobs, transportation, wholesaling and utilities by 6,700 jobs, and Leisure and hospitality by 4,900. However the area lost 1,000 manufacturing jobs and education and health jobs fell by 800.

This is according to the latest research from the Federal Reserve of Dallas which publishes data on the Houston-Sugarland-The Woodlands metropolitan area on a monthly basis.

In the year to July 2019, Houston added 76,400 new jobs, slightly higher than the comparable prior year (68,400 jobs). This included 5,600 manufacturing jobs year-on-year. However manufacturing jobs have dropped by 1,579 since March.

First quarter job growth was revised downwards by 15,000 (wonder if the 2nd quarter will also be revised down later?). Through July, that means that Houston employment has grown at an annual pace of 1.9 percent for 2019. That’s slightly below the historical annual growth rate of 2.1 per cent.

The unemployment rate in Houston rose from 3.6 percent in June to 3.8 percent in July. It’s now back above the US national average of 3.7 percent. The rate in Texas is 3.4 percent.

The Bank use 11 indicators to produce a composite Houston leading index. Compared with the quarter ended April 2019, the index has turned negative. All the index components have declined. However the biggest decline was in new orders for manufacturing which went from an annual 9.9 percent growth rate in the three months to April to a 1.3 percent contraction over the three months ending July.

As a result, the Bank expects more moderate growth for the local economy through the end of the year.

Separately, JLL reported that the total office vacancy rate for Houston declined for the first time since Q4 2014. The vacancy rate dropped from 24.5% in Q2 to 24.2% in Q3, primarily due to new leasing activity in west Houston.

The Feds also report that ‘Numerous business contacts across a wide range of industries are expressing concern about the impact of the ongoing trade disputes on future growth and prices.’

Last week, Gov Greg Abbott sent a letter to President Donald Trump in which he warned that tariffs on foreign steel, aluminum and other products risk slowing economic growth in Texas. Texas imported more than $8.3 billion in steel and aluminum last year, much of it pipe that cannot be manufactured in the US. In addition Gov Abbott pointed out that Texas exports $8 billion of tariff-eligible goods to China.

More tariffs between the US and China are set to take effect July 6.

If the tariffs go into effect, it will be interesting to see how long it takes for the effect to show up in the economic indicators for Houston.

The Fed also published data on the Dallas/Fort Worth metro area. Job growth was 3.2% in the first quarter and the unemployment rate was 3.6%. Worryingly, net absorption of office space was negative for the first time since the second quarter of 2010. The office vacancy rate rose to 20.5% and is likely to rise further as there is 4.9 million square feet under construction, much of it speculative.

The Federal Reserve Bank of Dallas has issued its June report for the Houston metropolitan area and the statistics were generally positive.

The Houston Business-Cycle Index expanded at an average rate of 3.2% so far in 2017, in line with its historical average and substantially better than the 1.8% decline throughout most of 2016. (The Business cycle index is a composite of leading and lagging indices which is used to forecast changes in the direction of the overall economy).

The Houston metro area has added 33,175 new jobs in the first 6 months of 2017 (2.2% annualized growth). The unemployment rate in June was 5.1%, below the YTD average of 5.4% and slightly below the June 2016 figure of 5.3%. Total job ads surged in June, suggesting healthy employment growth through September. The Feds noted that total job ads have been negative for 31 of the past 32 months.

The inventory of homes for sales rose from 3.6 months of supply in January to 4.1 months in June, while the median price of homes sold has been flat since peaking in February. This suggests the housing market is experiencing a modest cooling.

Construction, both commercial and multi-family are declining since peaking in 2015 and 2016 respectively. This is causing job losses for construction workers, particularly as the petrochemical construction boom is beginning to wind down.

Office vacancy rates were 21.4% in the second quarter, the highest since 1993. The apartment vacancy rate bottomed out in Q1 and was 7.8% in Q2.

Texas employment grew at a 2.8% annualized rate in the second quarter, higher than the national rate of 1.6%.