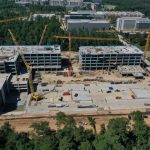 Hewlett Packard Enterprise (HPE) has announced it is moving its head office from San Jose to the Houston-area, though it is not clear how many jobs will relocate. HPE has revenues of $27 billion and a market capitalization of $14.4 billion. It provides servers and networking solutions aimed at large enterprises.

HPE was spun off from HP in 2015, with HP concentrating on consumer products. The largest concentration of HPE employees in the US was already in Houston. That was a result of its 2002 takeover of Compaq, founded in 1982 in Houston.

HPE’s current CEO Antonio Neri was based out of Houston for 11 years, prior to his relocation to California in 2015.

HPE will be moving into a newly-built campus in Springwoods Village, due to be completed in 2022. The HPE campus will consist of two five-story buildings totaling 440,000 sq. feet.  Construction started pre-pandemic so it’s not clear how much of space they will really need. Springwoods Village is also home to ExxonMobil’s 3 million sq. ft campus and HP’s 378,000 sq. ft campus.

Both HPE and HP previously occupied the former Compaq campus in NW Houston but decided to move after that campus was badly flooded in both 2016 and 2017 (Hurricane Harvey). 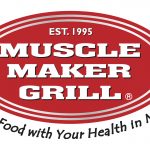 Muscle Maker has moved its corporate office from the Dallas-Fort Worth area to League City. The company has a market capitalization of $18 million and went public in February 2020. It was founded in New Jersey in 1995 and had its head office in the League City area until 2018.

The company owns and operates Muscle Maker Grill and Healthy Joe restaurants. Muscle Maker concentrates on fresh, made-to-order protein-based meals while Healthy Joe’s has a wider menu selection. As of 30 June, it operated 31 restaurants, located in 15 states and Kuwait. 20 of them are franchise restaurants.

Because of the pandemic, the company is moving to a delivery-only ‘ghost kitchen’  concept. The company intends to expand into non-traditional locations such as universities, military bases and office buildings.

The CEO is Mike Roper. He became the CEO in May 2018. Before that, he was the CEO of Taco Bueno, a Tex-Mex restaurant chain with its head office in the Dallas-Fort Worth area. Ferdinand Groenewald serves as the CFO. He joined the company in October 2017 and became the CFO in September 2019.

I’ve added Muscle Maker to the list of Houston Public Companies, along with Murphy Oil, an E&P company with a market cap of $1.3 billion. The company formally moved its head office from Arkansas to west Houston earlier this summer.