According to S&P Global Platts, the US exported an average of 7.4 billion cubic feet (bcf) a day of gas in November, more than the 7 billion that was imported. It has been nearly 60 years since that last occurred. 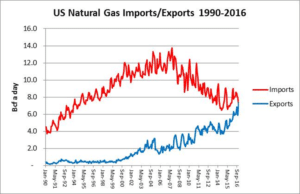 There are two trends driving this

In addition to Cheniere, there are other LNG export terminals under construction. These facilities have take-or pay contracts in place for another 4 BCf a day. Most of these facilities won’t start exporting until 2018 at the earliest. Therefore the US is likely to remain a net exporter on a consistent basis.

Given that US demand for gas has also been increasing, due to retirement of coal-fired power stations (a trend that is happening worldwide, including China) and increased petrochemical production, natural gas prices in the US will continue to rise.