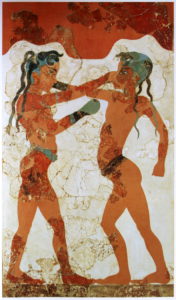 Camden Property Trust, a real estate company that specializes in multi-family apartment complexes, with its head office in Greenway Plaza, made some interesting comments on its earnings call on the state of the Houston housing market in 2017.

In the past, Camden has said that the rule of thing is that it takes 5,000 new jobs to absorb 1,000 new apartments. However in 2016, Houston absorbed 15,000 units on 15,000 new jobs. The CEO, Ric Campo, attributed this to new high-rise apartment complexes being built downtown, a product that didn’t really exist in the past. As a result, many sold their homes in the suburbs and moved to the urban core.

Regarding other markets in 2017 they rated them as follows;

The CEO alluded to the slacker economy in Austin (my words, not his). He said he had been surprised at the company’s revenue growth in Austin in the past two years, despite tepid reported jobs growth. He believes that the jobs growth may be under-reported and that ‘there’s a different category of folks that show up in Austin and find their way into the tech community and find jobs and pay rent in ways that may not be conventional’.

As an aside, Ric Campo, was also the chairman of the Houston Super Bowl Host Committee. The Super Bowl was held in Houston the past weekend and the logistical planning and execution of the event was superb, and reflected well on the city of Houston.

ConocoPhillips is moving its headquarters from here (1.4 million sq feet of office space on 62 acres in a campus style setting). 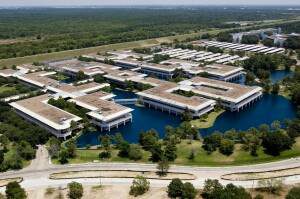 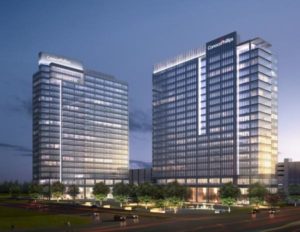 The tower on the right (Energy Center Three) is also occupied by ConocoPhillips. The company originally pre-leased both towers (1.1 million sq feet) back in 2013 when the oil markets were booming. It originally put Energy Center Four up for sublease earlier this year without ever occupying it.

ConocoPhillips is still assessing what to do with its existing headquarters. According to the Harris County Appraisal District, the land is valued at $60 million and the buildings at $71 million.

From a financial perspective, the deal probably makes sense given there is 9 million sq feet of Class A office space available for sublease in Houston (25% vacancy rate in West Houston).  The damage was done when they decided to lease the space back in 2013. Note that when they leased Energy Center Three, they relocated staff from other offices in West Houston, much of which is still available for sub-lease. It is amazing to think that a large E&P company forgot that the oil industry is cyclical!

I wonder whether the employees at the head office are happy about the move. The campus location is idyllic but I suspect inefficient (especially with all the recent headcount reductions), the new location functional but probably a bit soulless.

In their earnings call on 28 Oct, Camden Property Trust CEO, Richard Campo, made some interesting comments on the Houston apartment market that has obviously been weighing down their results.

He stated that approximately 23,000 apartments have been added to the Houston market this year and a further 10,000 are planned for next year. Most have been added by merchant builders who don’t have any units pre-let before they started building. Houston is projected to add 10,000 – 20,000 jobs this year. At a ratio of 5:1 this amounts to a demand for approx 4,000 apartments at the top end of the range.

In the boom years of 2013 and 2014 Houston added over 125,000 jobs each year. Since that time the Energy business has let go approx 80,000 with new jobs being in Healthcare, Petrochemical construction and retail. Those jobs are not as high paying as the lost Energy jobs.

As a result he estimates that the 2016 new builds have an occupancy rate of 30 per cent at most. In recent weeks there has been a massive shift in the local market where the merchant builders are now offering three months’ free rental, up from two previously.

Mr Campo expects that 2017 will remain weak for Houston. In 2018 there will be a significant drop off in unit completions and with the energy job market expected to increase, 2018 should be a strong year of recovery.

According to Axiometrics, residential rental rates in Houston dropped by 2.9% in August, primarily due to the Montrose/River Oaks area which dropped by 8%. August was the 5th straight month of rental declines.

Nationally rents in August 2016 increased by 2.9 percent on the prior year, while the occupancy rate of 95.2 percent was slightly below the figure from a year ago (95.4 percent).

The overall office vacancy in Houston continues to climb. The overall vacancy rate is around 15% (depending upon which broker report you read). Today the Houston Business Journal confirmed that Freeport-McMoRan has put 474,000 sq feet of downtown office space  on the market.