Greg Powell, Chief Integration Officer with Nextier Oilfield Services, will be leaving the company in May. Mr Powell was the CFO of Keane Group, prior to its all stock merger with C&J Services in October 2019.

Under the terms of the merger, Mr Powell was to leave at the earlier of (i) 18 months or (ii) the date at which the company achieves $100 million in annualized savings. He will receive a performance bonus of $2.6 million.

Mr Powell will also receive a cash severance payment of $3 million, to be paid over the next two years. In addition he will also get a pro-rated cash bonus for 2020 of approximately $300,000. Just over 200,000 restricted stock units will also vest. At the current share price of $2.40, these are worth $0.5 million.

Mr Powell spent 10 years in various divisions of General Electric. He then joined PE firm Cerebus Capital Management before coming the CFO at Keane Group, a portfolio company, in March 2011.

CFO of Nextier got $4.1m severance

At the time of the merger, Jans Kees van Gaalen, the CFO of C&J, became the CFO of the combined group. He left in December 2019, just 15 months after joining C&J, with a cash severance of $4.1 million.

Kenny Puchei, the former VP of Finance for Keane, was appointed as the new CFO.

The remaining executive officers are reducing salaries by 20% for 2020 due to the uncertainties caused by COVID-19.

Gary Rich, CEO of Parker Drilling, is leaving the company with a large severance package just months after the company emerged from bankruptcy proceedings. He will leave by December 31 at the latest, while the company searches for his successor.

Parker Drilling (market cap $270 million) has its head office in Greenway Plaza. The company is an international provider of contract drilling and drilling-related services. It has operations in 20 countries.

The business entered into pre-packaged bankruptcy proceedings in December 2018 and emerged at the end of March. It reduced its debt from $585 million to $210 million and raised an additional $95 million through an equity rights issue.

As part of his severance, Mr Rich will get;

Here’s what must be galling to the old shareholders. Mr Rich only entered into a new employment contract on March 26, 2019. Mr Rich’s salary was increased from $650,000 to $745,000. The restricted stock units were also granted at that time.

To add insult to injury, in July 2018, because of the low share price, the company switched to quarterly cash incentives in lieu of equity awards. Mr Rich received cash payments of $2 million for 2018 bonuses. He also received a cash payment of $532,000 in March 2019 relating to the vesting of a 2016 performance cash unit grant.

Just in case, Mr Rich wasn’t feeling rich enough, he also benefited from the cashing out of the old restricted stock units that were issued in the years prior to bankruptcy. That amounted to another $300,000.

Mr Rich has been the CEO since October 2012. At that time the stock price was around $65 (adjusted for stock splits). The business hasn’t made an operating profit since 2014.

Quanex has a market cap of $558 million and is based in the Galleria area. The company designs and produces energy-efficient windows and doors fenestration products in addition to kitchen and bath cabinet components.

Mr Zuehlke has been with the company since 2016. Prior to that, he was VP, Investor Relations at Halcon Resources.

The company operates in the Delaware Basin in West Texas and New Mexico. The company moved its head office from San Antonio to the Galleria area in June 2018.

Mr Ormand became Executive Chairman in July 2016 and was appointed CEO in April 2018. In that time, he went through two CEO’s and two COO’s. His first CEO, Avi Mirman resigned in August 2017 after being charged by the SEC in an unrelated $17 million penny stock fraud. His second CEO, James Linville, lasted seven months. Both received lucrative severance payments.

Mr Ormand had a base salary of $500,000 and received a $1.25 million cash bonus for 2018. He will receive a severance payment of 12 months of base salary. He will also receive an additional separation payment of $500,000 in consideration for extending his non-competition term from six months in his original employment agreement. The new non-compete term was not disclosed.

In addition, 693,000 shares of restricted stock will vest immediately. At the current share price of 69 cents, these are worth $478,000. 75% of these shares were only granted in February. Also, the exercise date for 250,000 options was extended for an additional two years. The option price is $2.98.

Through acquisitions and capital spending, average daily production increased from 350 Barrels of Oil Equivalent in 2016 to 6,058 BOE in the first quarter of 2019. However the growth was fueled by debt and the company remains cash flow negative.

In March 2019, the company agreed to convert $133 million of convertible debt issued in 2017 by Varde Partners to common and preferred stock. This meant that Varde, a Minneapolis investment firm, effectively controls 41.9% of the outstanding shares. Varde has been a long-time investor and owned about 20% when Mr Ormand became Executive Chairman in 2016. It’s not clear what prompted the change in CEO now.

Brian Hanson, the CEO of ION Geophysical has ‘retired’, effective June 1, to be replaced by Chris Usher, VP of Operations Optimization.

ION (market cap $103 million) has its head office in west Houston and provides products and services related to seismic data acquisition and processing.

When Mr Hanson was appointed CEO, the company had a market capitalization of $557 million. For 2018, the company had revenue of $180 million, EBITDA of $43 million and a net loss of $71 million.

Mr Usher started his career at WesternGeco and has worked at a number of seismic companies.

As an aside, in June, ION lost a case at the Supreme Court. WesternGeco had filed a lawsuit in 2009, alleging infringement of various patents. The Supreme Court ruled that a patent owner may recover lost foreign profits for infringement. A lower court had originally awarded WesternGeco $94 million in lost profits. Subsequently 4 of the 5 patents have been invalidated by the Patent Office, so the damages that ION may have to pay are likely to be much lower.

WesternGeco was owned by Schlumberger until it was sold in August 2018 to Shearwater GeoServices, a Norwegian company, for $600 million.

Lynn Bourdon, Chairman and CEO of American Midstream, has resigned from all his positions ahead of its $285 million deal to go private. That transaction was engineered by ArcLight Capital Partners who currently owns 51%.

Mr Bourdon has been CEO since December 2015. One of his first acts was to move the head office from Denver to the Westchase area of Houston. Mr Bourdon made several acquisitions after he was appointed, in a bid for growth. In early 2017 ArcLight also effectively merged American Midstream with another larger affiliated company, JP Energy.

The rapid growth from a series of smaller deals and the head office relocation taxed the controls and systems of the company, the big deal effectively broke the company.

The company recently filed its 10-K late. The audited financials raised going concern issues due to a $515 million credit agreement expiring in September 2019 and material weaknesses in internal controls.

The unvested phantom stock units were only granted in April 2018. The $1.74 million is on top of approximately $0.8 million of units that vested earlier this year. Note that the transaction to go private is not considered a change-of-control as ArcLight already owns 51%. Otherwise, the payments to Mr Bourdon would have been greater.

When Mr Bourdon was appointed in December 2015, the stock price was $7 per unit. It is being taken private at $5.25 per unit. The company was paying a quarterly dividend of 41.25 cents until it was slashed to 10 cents in July 2018. 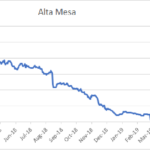 Alta Mesa, the struggling E&P company with its head office in west Houston, has given another large severance package to a senior Executive. This time it is Craig Collins, the COO of the Midstream division.

The Alta Mesa share price is currently $0.28 (market cap $50 million). When the company went public in February 2018, its market capitalization was $3.3 billion.

[Update 04-08-19 Company has drawn all its remaining capacity on its credit facility. It has hired Perella Weinberg Partners and Tudor Pickering Holt to assist with analyzing and considering financial alternatives].

[Update 04-12-19 Mr Collins has landed on his feet. He has been appointed COO of Altus Midstream, the company that was spun out of Apache in 2018. It has its head office in the Galleria area].

[Update 05-31-19 Mr Collins has resigned from Altus after 6 weeks. He has accepted a position with a large E&P company].

Mr Collins joined the company almost exactly one year ago. He had a base salary of $450,000 and received a cash sign-on bonus of $90,000. He will receive;

In his original offer letter, the target bonus in the event of termination was listed at 1 x target bonus. This has been increased in the severance package as Mr Collins has agreed to forfeit his rights to outstanding equity awards. The company acknowledges that the 2019 equity award would have had a minimum market value of $1.5 million.

Mr Collins took over from Jim Hackett, the former CEO of Anadarko Petroleum. Mr Hackett had the role of COO of the Midstream division as well as being Chairman of Alta Mesa.

Just before Christmas, Mr Hackett took over as interim CEO after the resignations of the CEO, COO and the Chief Technology Officer. The combined cash severance was approx $6.5 million.

At the same time, Mr Hackett employed the services of three consulting executives from Meridian Energy for a monthly fee of $245,771. The consulting firm can also earn a quarterly bonus of $872,950 and a semi-annual bonus of $2.1 million, assuming certain performance metrics are met.

Annual report will be late

In February, the company disclosed it would be late in filing its annual report. It expects to report a non-cash impairment of $3.1 billion. The company is also in breach of its covenants with its lenders. It also expects to report a material weakness in internal controls over financial reporting.

The company let go 58 employees from its head office in February.